‘A place in heaven’: How Container Store’s co-founder helped save NW Dallas’ stretch of the Trinity River

“If someone just dropped you in here,” said Groundwork Dallas’ COO, “you would’t think you were in Dallas.”

One morning last week, I went for a long hike in a part of this city I’d never seen, though it sits but 3 miles and 10 minutes’ drive from where I was born and still live today. The occasion was a long-discussed sojourn with Garrett Boone, the Container Store co-founder, to witness his restorative work in the woods and waterways along the shores of the Elm Fork of the Trinity River near Harry Hines Boulevard and Stemmons Freeway, an obscured paradise we drive past but never to.

We met at Hines Park, across from the RaceTrac gas station — near the old Club Schmitz off Harry Hines. Boone, dressed business-casual for a hot day’s trek, was there when I drove up and parked in the small lot; so, too, were Rick Buckley, executive director of the nonprofit Groundwork Dallas, and his young chief operating officer, Aaryaman Singhal. The men were surveying a decades-old stone picnic table that had been smashed to rubble by a drunken-driving suspect the night before.

They wanted to begin our tour here, on what the Park and Recreation Department’s website calls a “mini park” to show first that this former rest stop dating back decades is hardly diminutive, easily dismissed.

It’s actually 15 acres protected in spots by a newly constructed wood fence and ringed by a trail nearly a mile long, which was hand-carved by Buckley, ex-Army and a teacher of trail-building, and Groundwork’s volunteers. Inside that trail’s loop is a pond fed by water seeping in from the nearby Bachman Lake Dam, as well as a spring. A recently constructed wood viewing platform, which serves as a pier during floods, overlooks the water, and newly constructed seating makes up a sort-of amphitheater beneath the shade trees.

Along the trail, which runs parallel to Stemmons in spots, there are benches and a wood bridge Buckley built with stainless-steel railings. And somewhere inside here, Buckley said, is the largest beaver dam in the city, at least according to City Hall’s biologist. 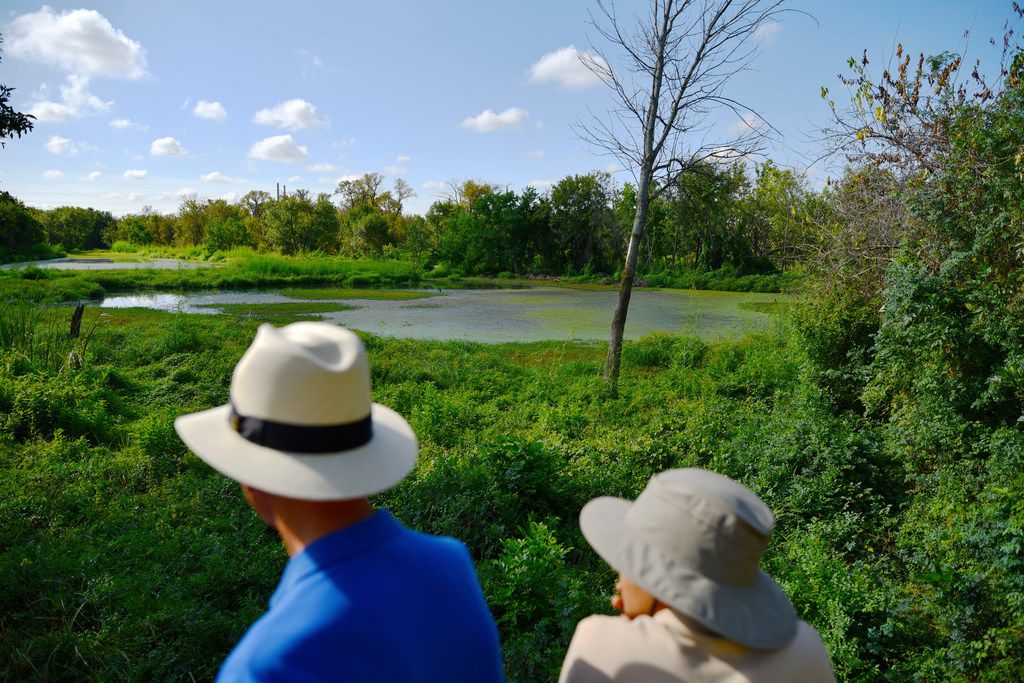 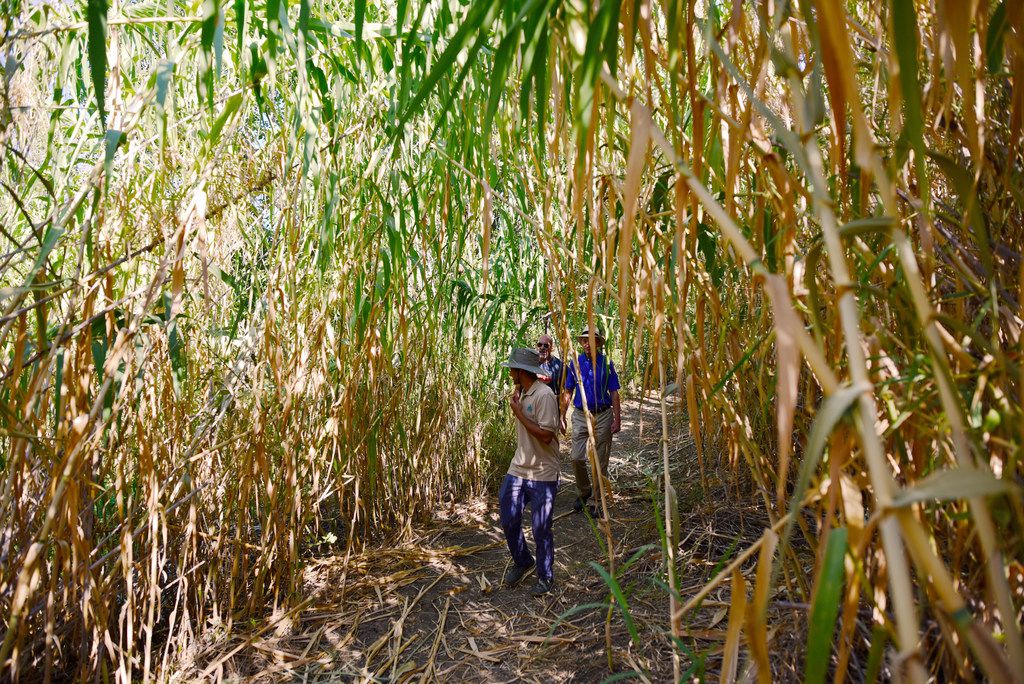 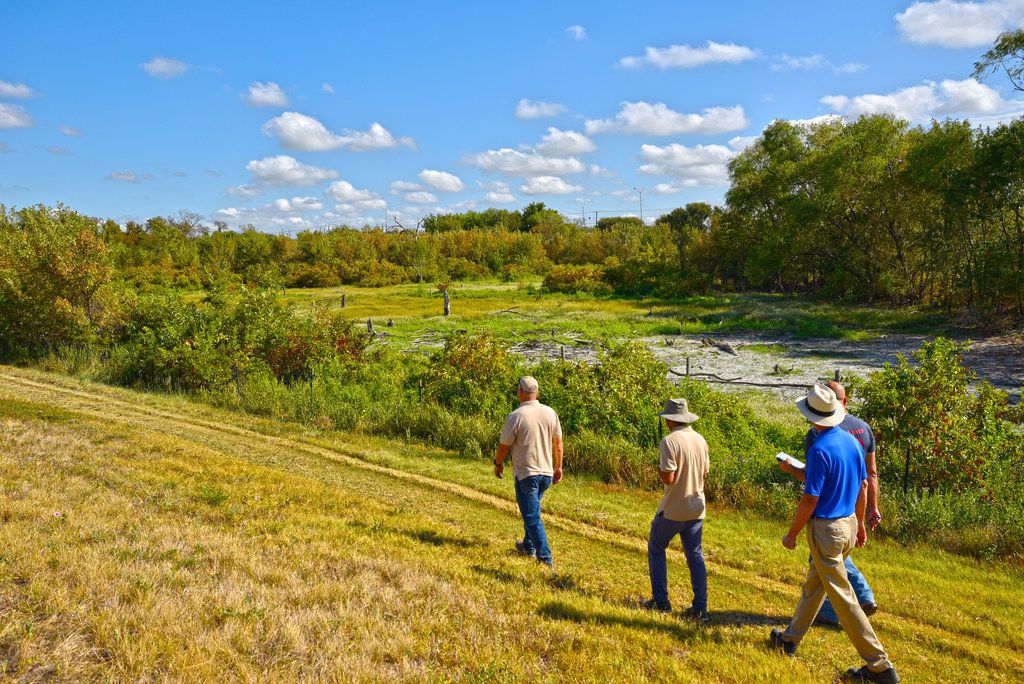 3/3This is what you drive past when you speed by Hines Park, sandwiched between Stemmons Freeway and Harry Hines Boulevard.(Ben Torres / Special Contributor)

This park, a roadside attraction only recently reopened after Groundwork’s good deeds, was where Boone discovered the Elm Fork — its “treasure trove of wilderness,” he said, ignored during our daily to-and-fro along the nearby high-speed interstate. Boone said Hines Park was once like so much of this stretch of northwest Dallas — polluted and disused, not even an afterthought.

“Historically, it has been an area where people put up with strip clubs and massage parlors, the street walkers,” he said. “This part is interesting because it shows the challenges throughout the corridor,” long considered among Dallas’ most dangerous by police who red-tag it as a “hot spot” to warn of its copious dangers.

I’ve driven by it countless times and, until this meeting, never slowed down long enough to contemplate pulling over. I asked Boone why he did.

He said he had a woodworking shop nearby, and in 2006 finally stopped to see what this was. “And, my God, it was incredible,” he said, describing a vista filled with shorebirds, dragonflies.

“I grew up in Dallas and didn’t even know where the Elm Fork River was. I finally noticed this park and realized it was an incredible nature area, and that it needed respectful access.”

Groundwork Dallas provides that access, funded by private donations and foundations, among them the Boone Family Foundation.

Hines Park is but a small fraction of their work here. On the other side of Stemmons is the Frasier Dam Recreational Area, named for the spillway about a mile from the highway, wedged beneath the winding forest and an industrial park on the other side of the levee. You know the area — seen it, likely, from the passenger-side window as you barrel south down Stemmons toward Regal Row. It looks like a lake and was once the Elm Fork, until this section of the Trinity was rerouted to make way for the levees.

“This is my favorite part,” Singhal said over the roar of Stemmons traffic. “Walk back a quarter, half a mile and you can’t hear the road. If someone just dropped you in here, you wouldn’t think you were in Dallas.” 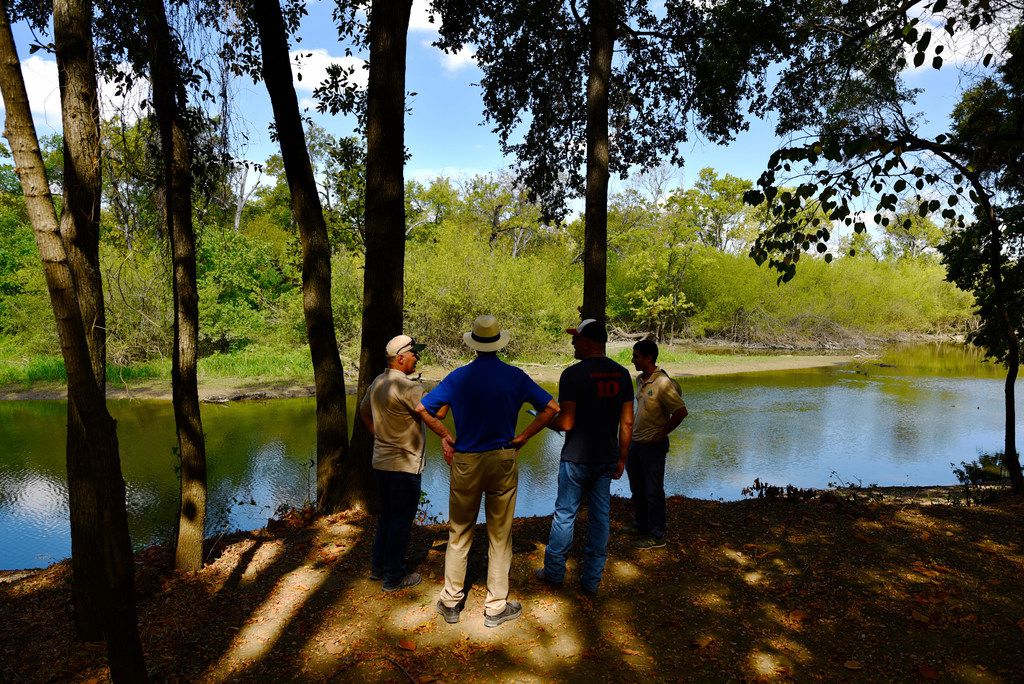 1/2The Elm Fork of the Trinity River, easily accessed from the Frasier Dam Recreational Area now open to the public(Ben Torres / Special Contributor) 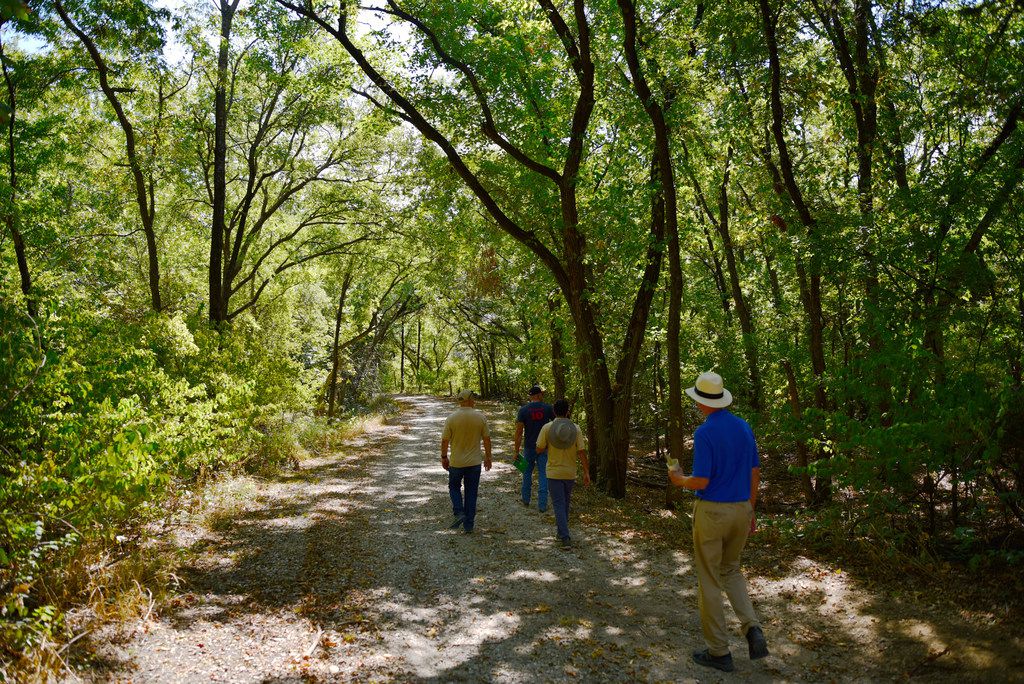 2/2Unlike some of the paths in the Great Trinity Forest, everything along the Elm Fork is natural, thanks to trail-builder and Groundworks Dallas executive director Richard Buckley and his staff of volunteers.(Ben Torres / Special Contributor)

It’s not inaccessible, merely hard to reach; you get to it using Harry Hines taking the southbound Stemmons access road. And even then it’s tucked off to the side, where the city has laid down a white-dirt parking lot and erected a gate to stop interlopers from despoiling what lies beyond the barrier.

Until only a few years ago, this land — some 100 acres of thicket, part of the larger 1,000 acres that make up what these men call the Elm Fork Forest — was abandoned to the tire-dumpers and the garbage-tossers. The people who have spent years cleaning it on our behalf tell tales of trash covering the river from one shore to the other, of ponds and river hidden beneath mountains of detritus — enough ground-up Styrofoam to make it look as though there’d been a snowstorm in summertime. “Trashy Creek,” they used to call it.

And for years, the homeless have taken shelter in these woods along the Trinity, with encampments grown so large their sprawl peeks out from beneath the forest’s canopy. You can drive Stemmons sometimes, south from Walnut Hill Lane, and see tents lining the riverbed — occasionally with American flags waving along the horizon.

Boone tells stories of first coming down here and seeing “two guys passing drugs through the windows of their cars” and turning tail. Here, too, is where bodies were dumped. A cursory glance at this newspaper’s archives reveals multiple horror stories: “Authorities identify woman found dead in Trinity’s Elm Fork” from 1984; “A body found Wednesday in the Elm Fork of the Trinity River could be that of a 3-year-old girl reported missing” from ’99.

Little wonder we ignore the splendor in front of us; we’ve been scared off, led astray, told this verdurous land is violent or at the very least inhospitable when it’s anything but. 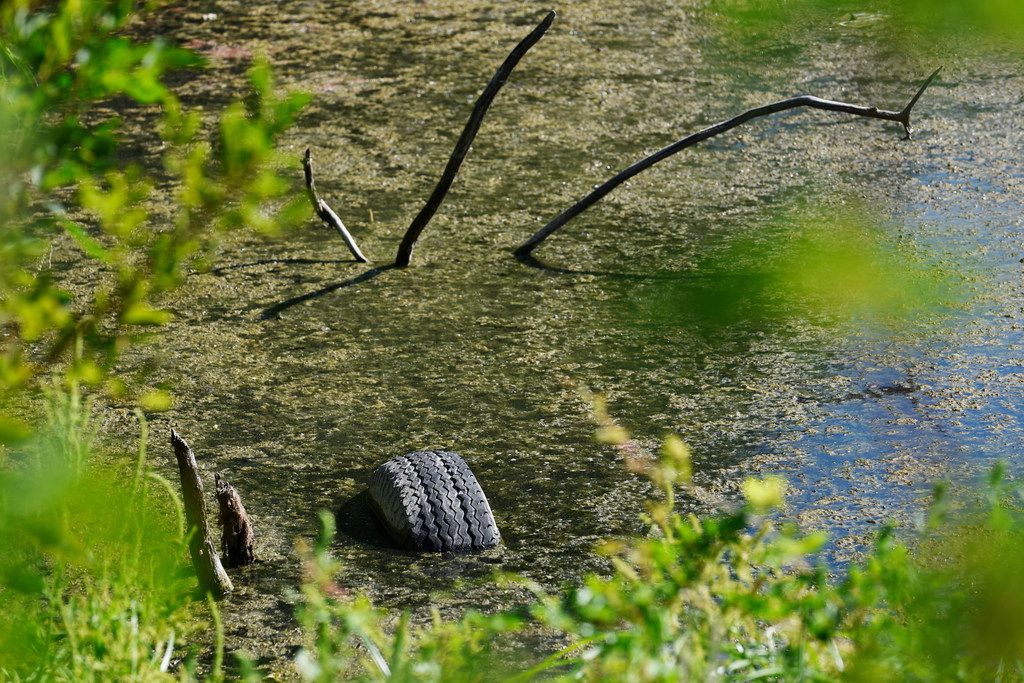 1/3A tire peeking out of the water at Hines Park, down because of extreme drought, shows the work left to be done here.(Ben Torres / Special Contributor) 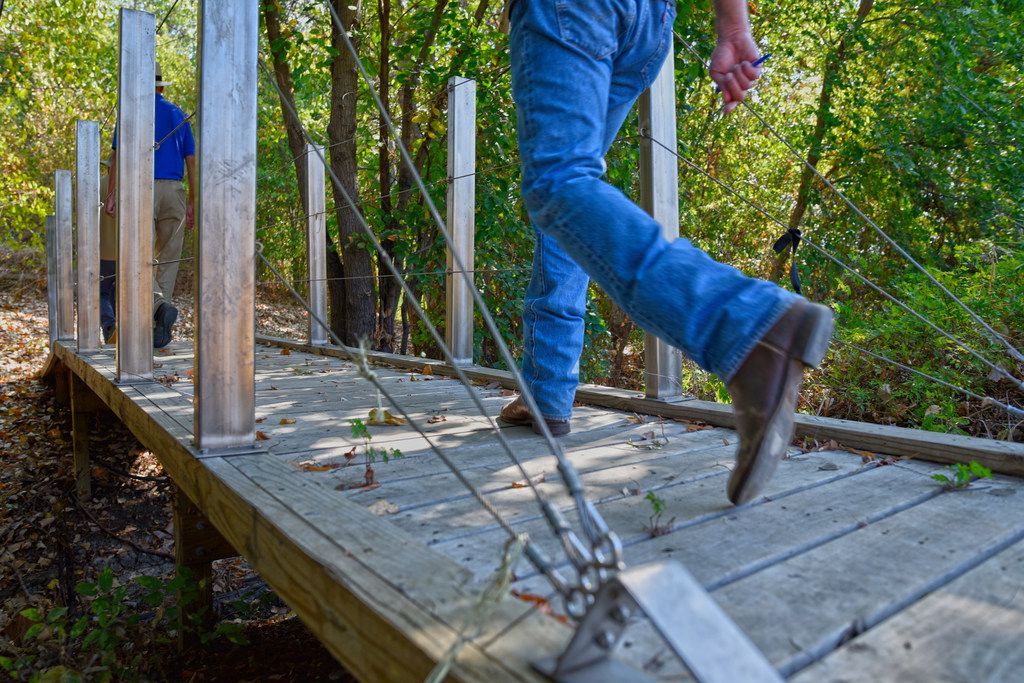 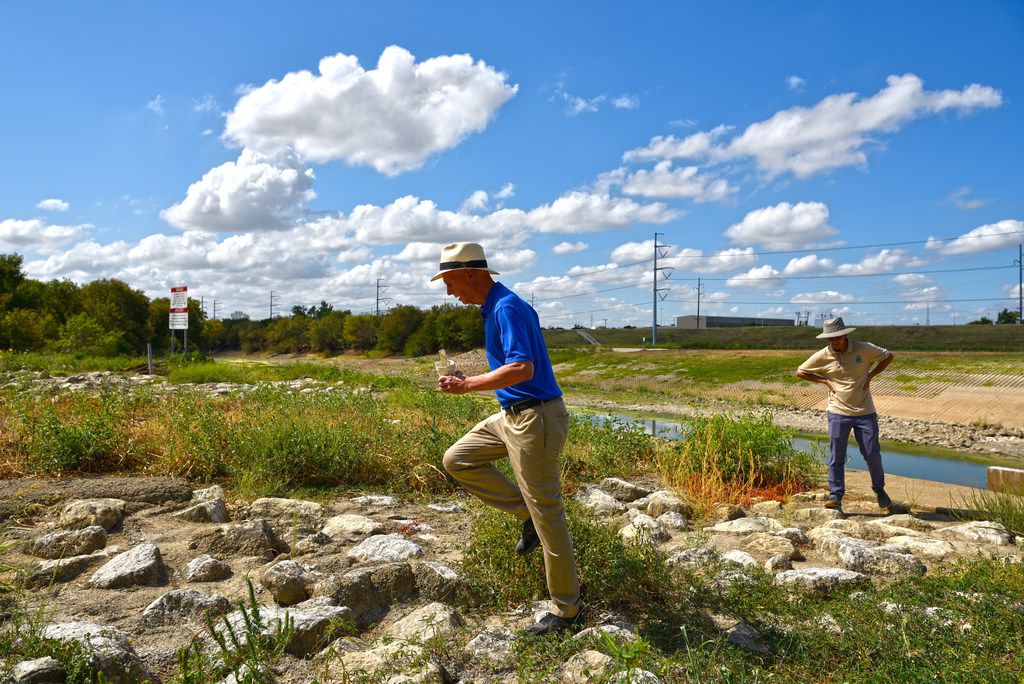 “It’s like so much of the Trinity — nobody paid any attention to it,” Boone said. And nobody understood it. Boone said he was especially inspired to rescue this land when Trinity East Energy tried to gas-drill down here, until the City Council finally said no in 2013 (sparking a lawsuit still very much alive today). Boone remembers at least one council member saying, well, it’s not much of a parkland anyway, is it?

All this land is now open to the public, with youth mountain bike parks and picnic sites under construction along wide trails swallowed by tall trees. Here, you can walk down to the Trinity along flat shorelines and benign banks that make it easy to put in a canoe or kayak. Soon, too, trails will connect this stretch of the Elm Fork with points further north and west, including Irving’s Campion Trail.

This forest is but a fraction of the size of the Great Trinity Forest, which stretches from the city’s center southward for some 6,000 acres. But it’s somehow even more majestic, maybe because of where it sits — along an industrial corridor, a glorious nowhere in the middle of a dingy somewhere.

“This is like the wilderness you’d find in Wyoming or Colorado,” Boone said. We were in the middle of the forest, near what’s called Fishing Hole Lake — maybe a quarter-mile from the interstate, from the nearby Motel 6 and the warehouses and the biker club. Except all you could hear was chirping and whirring; the silence, too.

“This road,” said Garrett Boone, grinning broadly as he stared into the never-ending green, “is like a place in heaven.”